In the mid-13th century Glagolitism gained legitimacy to coexist as a possibility in the Catholic Church, meaning that the Roman Rite liturgy could be performed equally in Latin and in the Church Slavic, after which began the period called the Golden Age of Croatian Glagolitism thanks to its extremely great literary heritage. With this legitimacy, the new redaction standard of Croatian Church Slavic language was quickly set, and the texts were written in systematized script and language. In this way, the conditions were created for the Glagolitic script to be firmly established in liturgical use (missals and breviaries), but also to step up and become a script of liturgical, didactic, moral-theological and preaching literature in the Croatian Church Slavic language (miscellanies), as well as the script of pragmatic literacy in medieval Croatian language (laws, statutes, certificates, letters, register and other records).

Dozens of manuscript Glagolitic books with liturgical content from the 14th and 15th century have come to us, and we know for hundreds of others in the archive. It is therefore assumed that manuscript Glagolitic books were made in organized scriptoriums such as monasteries, clergy houses and scribes’ workshops. The latter were known as apoteke, as is the case with the workshop of Bartol Ivanov from Zadar. Researchers generally associate the existence of Glagolitic scriptoriums with monasteries of Glagolitic Benedictines, Paulines and Glagolitic Franciscan Tertiaries, as well as with strong Glagolitic centers such as Berm, Hum, Krk, Lindar, Rijeka, Roč, Senj, Vrbnik, Zadar and others, since certain Glagolitic codices come from there or certain Glagolitic scribes were working there. There are several data supporting the fact that the scriptorium of the Benedictine monastery of St. Krševan in Zadar had a place for Croatian Glagolitic book because Czech Benedictines used to come there for the Glagolitic training in the 15th century.

However, there is too little information to reveal the very organization of a Glagolitic scriptorium as a specialized workshop for making manuscript books. Just in terms of manuscript printing and painting, there must have been a text editor along with the main copyist and his assistants, sometimes referred to as “žakni”, and, if necessary, a miniaturist for initials, titles and, in better case, for illuminations. Finally, no work could have been done without someone who knew how to choose a good parchment and writing material as well as without a bookbinder who would bind the written and painted parchments in a codex. This was a complex work which still remains an unknown and mysterious world for researchers.

Today, we know of many Glagolitic scribes who signed their works, such as Prince Novak Disislavić, žakan Kirin from Senj, Gregorij Borislavić from Modruš, Vid Omišljanin from 14th century, or Butko, Bartol Krbavac, žakan Luka from Vrbnik, archbishop Tomas from Senj, Broz Kolunić, Pop Petar Fraščić, žakan Blaž Baromić, Pop Martinac Lapčanin from 15th century, and at the turn of the century, when there was still a great need for manuscripts, there were Fra Stipan Belić, Pop Šimun Greblo or Fra Šimun Klimantović. They and many other known and unknown writers and translators or illuminators of Glagolitic manuscripts left a lasting testimony according to which the Croatian Glagolitic book, although unique in terms of its script and language, with regard to its content belonged to a large family of Western Christian peoples because it mainly dealt with topics that were typical of the Western European civilization. The Croatian people have always loved their book and respected its scribes. As “žakan” Broz Kolunić wrote, Let them who have respect for the books be respected by the books. 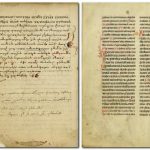