The parchment and paper with printed Glagolitic letters testify to the durability and persistence of the script which is pretty special in the Croatian ethnic and linguistic space. The Glagolitic manuscript tradition has for centuries coexisted with printed Glagolitic heritage, witnessing the constant need of an individual and the wider community to write and record irrespective of the nature of the written document. Glagolitic script has lived for many centuries in the culture of writing and copying, each of the Glagolitic letters being written in a unique and unrepeatable way, coming from the hand of a scribe or a copyist who left a unique mark in it. Each Glagolitic letter in the manuscripts is unique since the letters from the manuscript tradition lack the uniformity and similarity of the letters of printed books produced in the printing and typography workshops.

The preserved Glagolitic manuscripts stored in the National and University Library in Zagreb were collected as relevant witnesses of Glagolitic literacy, which lasted from the 11th/12th to the 20th century. Glagolitic codices and manuscript fragments have been written and copied since the 14th century. The liturgical books, which are also the oldest Glagolitic manuscripts in the National and University Library, are preserved only as fragments or completely, such as a wonderful Mavro Breviary, written in 1460. In addition to the missals and breviaries of the 15th century, the Glagolitic script was also used in codices. The collection of Lent Sermons Korizmenjak or Kvarezimal, made after the work of the well-known Franciscan preacher Roberto Caracciolo, features an added passage of the Interpretation of the Passion of Christ, R 4002 (Greblov kvarezimal i tumačenje muke) The 15th century also saw the publication of a codex entitled The Theological Manual by the Glagolitic Parish Priest (R 6635), which, along with practical instructions for a parish priest, brings the chronicle of significant events from that time. A compilation of a famous work Confessionale, written by St. Antonin, an Italian theologist and Archbishop of Florence, was written in cursive Glagolitic script as a part of a codex from the beginning of the 16th century in Omišalj. In Vrbnik at the beginning of the 17th century, Pop Ivan Fugošić wrote the Dialogue of Pope Gregory, an adaptation of the work by Pope Gregory the Great. Various texts, including both real and imaginary events, along with coexistence of the spiritual and the secular, were collected in Glagolitic anthologies and miscellanies. One of the early examples of such works is Petris’ Miscellany (Petrisov zbornik), written in 1468 in Vrbnik (R 4001). Glagolitic prose texts were recorded even after the 15th century, featuring both passages from the Holy Scriptures or from the works of church fathers and teachers with freely shaped prose passages. In their pastoral ministry, devoted priests also wrote numerous sermons, trying to convey to their faithful the words of Jesus, which were preserved in the Holy Scriptures. Sermons were recorded completely or in fragments in the preserved Glagolitic codices stored in the National and University Library in Zagreb.

Legal Glagolitic texts in the National and University Library are preserved in transcripts. The texts of The Istrian Demarcation (Razvod Istarski), Law Codex of Vinodol (Vinodolski zakonik) and The Vrbnik/Vrbani Statute (Vrbnički statut), copied in the 16th century, present a proof that Glagolitic literacy was most deeply rooted in Istria and the Croatian Littoral. The Istrian Demarcation, Law Codex of Vinodol and The Vrbnik/Vrbani Statute were written in the transitional period from the middle ages to the modern age and were first published in the 19th century, at a time when the rights of certain European nations were intensively studied. All three documents are the reflection of a distinct legal tradition in Croatian countries, which has always been part of a common European tradition. Moreover, Law Codex of Vinodol (Vinodolski zakonik), originally written in 1288, is the oldest legal text of the South Slavs.

Glagolitic texts were written and copied further in the 18th and 19th century. From this period the National and University Library in Zagreb stores the preserved manuscripts for priests and parish priests serving God (directories) and engaging in pastoral activity among the believers (catechisms, prayer books, rituals and liturgical books). Glagolitic documents from the Croatian Littoral and numerous Glagolitic records prove that Glagolitic script was used also in the public life of certain places and cities, therefore its influence and presence in everyday life of the community was significant. Vatroslav Jagić’s manuscript heritage contains transcripts of Glagolitic texts of significant linguistic monuments.

From the example of Glagolitic manuscripts stored in the National and University Library in Zagreb, it is evident that not only liturgical books were written in Glagolitic. In the minds of people Glagolitic was a script intended primarily for writing books and documents for Church purposes. The reason for this lies in the fact that the first source of literacy and schooling were Church institutions with the individuals who served it. The preserved Glagolitic manuscripts, however, show that the function and expansion of Glagolitic script go beyond the boundaries and scope of the Church as an institution and become effective not only in the everyday life situations of ordinary people who, just like the great individuals, had their own worries, but also in the wider social community life which needed legal regulations. 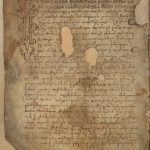