The Croatian Glagolitic Heritage online exhibition was prepared together with a homonymous exhibition put on at the National and University Library in Zagreb from 6 November to 15 December 2018.

Both exhibitions were organised as part of the Croatian Glagolitic Heritage project headed by project leaders Dr Ivan Kosić, and Dr Irena Galić Bešker, also the former and current heads of the Manuscripts and Old Books Collection at the National and University Library in Zagreb, respectively. Launched in 2017 and conducted in cooperation with several Croatian academic and heritage institutions, the project has been financially supported by the Croatian Ministry of Culture. It was launched with the aim of encouraging a wider digitisation of Glagolitic manuscripts and books, located both in Croatia and abroad, and providing direct insight into this valuable heritage to researchers, university and secondary school students, and to the general public as well, through the Glagoljica.hr online portal.

The Croatian Glagolitic Heritage exhibition, authored by Sandi Antonac, was organised not only to tell the story of Croatian Glagolitic in an unpretentious and interesting way, but also to present the Library’s Croatian Glagolitic Heritage project and the related Glagoljica.hr online portal, which makes available Glagolitic books, manuscripts and research papers in the field of Glagolitic studies digitised as part of the project. The aim of creating the exhibition’s online counterpart was to present in one place all efforts expended so far with the aim of revitalising this somewhat forgotten alphabet and its related heritage, which has shaped Croatia’s national culture in a particularly characteristic way and has thus become the symbol of the Croatian cultural identity. Also, the exhibition documents the highlights of the 2018 exhibition, bringing it to all those who were not able to visit it. 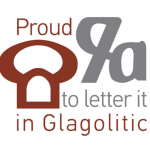