THE PROTESTANT PRINTING HOUSE IN URACH

From 1561 to 1565, Urach, a small Württemberg town near Tübingen, was home to a Croatian Protestant printing house, which operated under the name Windische, chrabatische und cirulische Thrukerey. It was founded and funded by Ivan Ungnad (Hans Ungnad), Captain General of Styria and great prefect of the Varaždin district. The printing house and its staff was located at a former Carthusian monastery and Amandenhof castle, both of which Ungnad received as a gift from Duke Christoph of Württemberg. Books were edited and prepared for printing by Stjepan Konzul Istranin and Anton Dalmatin, and a number of collaborators. After Ungnad’s death, in 1564, the printing house was relocated from Urach to Ungnad’s Waldenstein castle in Carinthia, where its equipment was confiscated in 1580, and subsequently locked away at the Schlossberg fortress in Graz. In 1626, it was moved to Rijeka, and later to Rome, where it was used for printing orthodox Catholic books in the Glagolitic alphabet.

The Urach printing house published thirty religious and liturgical books in the Croatian language, fourteen of which (including one trial print) were in Glagolitic, nine in Cyrillic and six in Latin. Also, it printed six books in Italian, which were translated and edited largely by Croatian collaborators. The most comprehensive and voluminous of its works, containing 898 pages, was the Croatian translation of the Bible, printed in Glagolitic and Cyrillic and illustrated by woodcuts, in the fashion similar to that used in German editions. The front pages of all Croatian books include the indication that they were translations into Croatian (stumačene v hrvatski jazik), and state Tübingen as their place of publication. Namely, the printing house in Urach operated as the branch of the Tübingen printing house of Ulrich Morchart which, apart from its own titles, printed the German forewords to Croatian Protestant books. From some 25,600 copies of Croatian books only 250 have been preserved to this day, the majority of which are held by German libraries. All documents, official records and bills of the Urach printing house have been preserved and are today part of the holdings of the Library of the University of Tübingen. 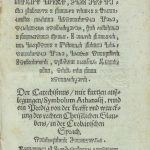