As a part of archeology and as one of auxiliary sciences of history, epigraphy studies inscriptions and graffiti engraved, written or paired in some solid material (stone, metal, glass, brick, wood, plaster etc.). Inscriptions are extremely important for researches in history, art history and related fields, thus they are rightly referred to as “archives in stone”. In terms of their creation and purpose inscriptions are related to the object on which they are found, such as those referring to a particular way of construction or tombstones. Graffiti were later engraved on an object and reflect the everyday life of individuals or communities. Each epigraphy, depending on the language and the script in which the records were made, enters the domain of philological and linguistic researches.

Croatian Glagolitic inscriptions and graffiti are unique and extremely important historical sources, dating back to the middle and early modern age, from the 11th to 19th century (the oldest Glagolitic inscriptions – graffiti date back to 10th and 11th century, and were located in Bulgaria, Romania, Ukraine, Russia etc.). Most of Croatian Glagolitic epigraphic monuments were preserved in Istria and Kvarner, followed by the Zadar area, and elsewhere where Slavic liturgy was present.

While Croatian Glagolitic inscriptions were engraved in stone or painted in color, chalk or charcoal on church frescos and elsewhere, graffiti were mostly paired with a stone or some other hard surface like wall plaster and they are results of the work of individuals who wanted to leave a certain written record behind them, demonstrate acquired writing skills, or mock someone or something, etc. They were recorded and preserved in Istria and on the Kvarner Islands, testifying about the special Glagolitic culture of that area. These records are a reflection of the literacy but also the scholarship of individuals who acquired their education in the rural circle of Glagolitic priests (“popovi”) and monks (Benedictines, Franciscans, and Paulines), therefore they present a specificum in the written cultural heritage of Western European territories. 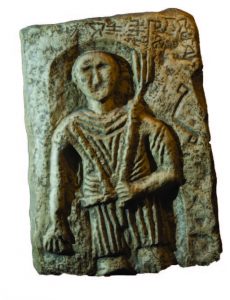 The Plomin inscription, Plomin, Istria, 11th century. The oldest inscription from the Istrian mainland is engraved on the stone relief above the image of St George who is depicted holding a palm in his hand. The rustic mediaeval relief models itself on the images of the deceased from Roman tombstones. 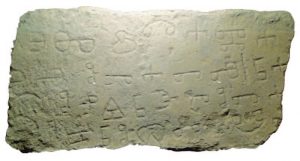 The Krk inscription, the island of Krk, 11th century. A fragment written in the round Glagolitic script. The inscription mentions the
building activities of the Benedictine Glagolities, abbots, and it cites several old Croatian names: Dobroslav, Radonja and Rugota. 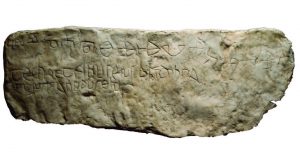 The Valun Tablet, Valun, the island of Cres, 11th century. A bilingual inscription written in Croatian, in the Glagolitic script, and in Latin, in Carolingian. The inscription records three old Croatian names of a grandmother, a son and a grandson. 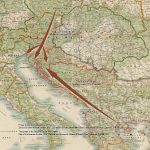