Vrančić 1598 – return to the service of the Emperor Rudolf II

In 1598, Vrančić returned to the service of the Emperor Rudolf II. He was named a counselor for Hungary and Transylvania and the titular bishop of Csanád. He became a head of a diocese that at that time was largely under Ottoman occupation. By acquiring a new status he writes epistles about the then social and religious circumstances. He was a consistent fighter for Catholic Renewal and an opponent to the Reformation, believing that religious divisions in the territory of Hungary greatly reduced the help of Christian countries in the struggle against the Ottomans. Tomko Mrnavić, Vrančić’s protégé, writer and historian and the titular bishop of Bosnia, wrote the following about the work of Faust Vrančić in that period:

He brought the shepherds of souls and teachers among the people who were then pressed by the eternal tyranny of the heretical conquerors. Because of the inadequate number of Catholic priests, he himself visited the people, the towns and villages of his parish, and continually spoke according to his service.

Next on timelineMoving to Rome 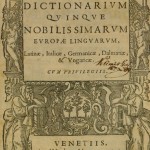 Previous on timelineDictionary of the five most noble languages of Europe