Apart from being the most important source of data on Croatian medieval literature, with its 350 leaves, the 1468 Petris Miscellany (Petrisov zbornik) is the most voluminous, and also the most interesting among manuscript miscellanies of Croatian medieval Glagolitic heritage. It includes apocryphal writings, parts of medieval novels, encyclopaedic texts, treatises, recipes, etc. It was named after Josip Antun Petris, a 1787-1868 canon of Krk, as part of whose possessions the miscellany was discovered. It was written in an attractive Glagolitic cursive, by three scribes. Its language combines the elements of the Chakavian and Kajkavian dialects of Croatian, and Old Church Slavic. It still has not been established whether it was written in Istria or in the Ozalj region. The manuscript preserved at the National and University Library in Zagreb is held under the shelfmark R 4001. 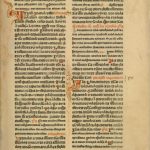