The printing house in Senj operated from 1494 to 1508, with intervals of inactivity. During this period, it published at least seven books: two liturgical works, five Croatian translations of popular handbooks of theology, religious-didactic and literary works. While liturgical works were printed in two colours, red and black, non-liturgical works were printed only in black. The founder of the printing house was Canon Blaž Baromić, who was also the canon lawyer of the Senj Bishop and the local chapter from 1484 to 1505. During his stay in Venice in 1493, Baromić learned the secrets of the art of typesetting and printing at the printing house of Andrea Torresano, where he supervised and prepared for printing a Glagolitic breviary that became known as The Baromić Breviary (Baromićev brevijar). The next year, in 1494, with types he brought from Venice, he set up a Glagolitic printing house in Senj, where on 7 August, together with Silvestar Bedričić and Gašpar Turčić, he finished printing the two-column and bichrome Senj missal (Senjski misal). In April 1496, Baromić finished printing Spovid općena, a handbook for priests on hearing confessions. The colophons of the subsequently published works do not indicate his name, but the name of Grgur Senjanin instead, who printed a handbook of theology Naručnik plebanušev in 1507, then in 1508 Korizmenjak, a collection of 49 Lent sermons translated from Italian by Petar Jakovčić and Silvestar Bedričić, and Transit svetog Jerolima, published on 5 May 1508 as the Croatian translation of the Italian version of Vita et Transitus sancti Hieronymi. In 1508, the Senj printing house published Mirakuli blažene deve Marie, the Croatian translation of an Italian work Miracoli della gloriosa Vergine Maria and the most comprehensive collection of Mary’s miracles in Croatian Glagolitic literature, while presumably in the previous year it published Meštrija od dobra umrtija, the Croatian translation of a famous work of the ars moriendi. The works published by the Senj printing house have profound significance as testimonials of the history of the Croatian language and Croatian medieval culture.

The basic typographic equipment of the Senj printing house consisted of two sets of types – of smaller and larger size – accompanied by ligatures joining two or more graphemes, types and ligatures with brevigraphs, Latin and Glagolitic initials of smaller size (two lines in height) and four large initials, i.e. Glagolitic B and S, and Glagolitic and Latin V. It also included a special sign for each new title and chapter, the typographic mark and a woodcut depicting Crucifixion. The types, designed by Baromić himself, are considered the most complete and aesthetically attractive achievement of Croatian Glagolitic printing tradition. 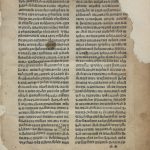