(article published in the 15th issue of “The Voice of NSK”, the journal of the National and University Library in Zagreb)

From 6 November to 15 December 2018, the National and University Library in Zagreb organised and hosted Croatian Glagolitic Heritage, an exhibition offering a historical overview of Croatia’s oldest alphabet and presenting its typography, cultural impact and contemporary use. Taking place under the slogan Proud to letter it in Glagolitic, the exhibition was held as part of the European Year of Cultural Heritage.

Apart from providing a comprehensive overview of the origin and significance of Glagolitic, the exhibition presented tangible and intangible Glagolitic heritage through a wide variety of audiovisual content and included the setting up of the exhibition’s virtual counterpart, with descriptions in the Croatian and English languages and three alphabets – Latin, Glagolitic and Braille.

The exhibition thematised various theories of the origin of Glagolitic, the mission of Saints Cyril and Methodius, monuments, manuscripts and printed books belonging to the Glagolitic tradition, as well as the modern use of this script in art, tourism, public life, etc. The exhibition’s main idea was to present Glagolitic in a new guise, put it into the context of new media and take it beyond books and stone monuments that it is usually associated with. Thus, the exhibition included a special interactive corner, where visitors could make a bookmarker in the form of the Glagolitic letter Iže using a 3D printer, write Glagolitic letters by programming a Pro-Bot, or draw graffiti in Glagolitic whose printouts they could bring with them as exhibition souvenirs.

A particularly impressive part of the exhibition was a huge book dominating the Library’s grand lobby, an enlarged replica of a Glagolitic primer printed in 1527 made in size ten times as large as the original, which currently makes it the largest Croatian printed book.

Passers-by and drivers in the Library’s vicinity could hardly miss the colourful large Glagolitic letters projected based on the micro:bit technology on the Library’s façade and charmingly lighting up the twilight of Zagreb.

The exhibition was opened by the President of the Republic of Croatia Kolinda Grabar-Kitarović, under whose auspices it was held. The well-attended opening programme widely covered by the media proved to be only an introduction into liveliness with which the Library’s grand lobby was to vibrate in the weeks to come. It received interested visitors from all parts of Croatia, the majority of which were students of primary schools from Vukovar to Dubrovnik. A considerable number of the visitors also came from abroad, especially from neighbouring countries.

According to official statistics, the exhibition was seen by 6,500 visitors in 185 groups. They were welcomed and given guided tours of the Library by staff members of the Library’s Information Centre who, apart from presenting the exhibition, also tried to acquaint them with as many interesting details as possible about the Library itself, especially focusing on its long history and role in today’s society. Dedicatedly fulfilling this role and caring for the treasures of Glagolitic heritage in its collections, the Library takes a significant part of responsibility for saving Glagolitic and its related tradition from falling into oblivion.

Indispensable in the preparation of the exhibition was the valuable contribution of volunteers, whose patience and smiles won the sympathies not only of the exhibition visitors, but of the Library’s staff as well. 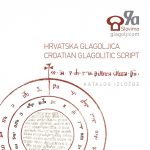 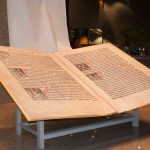