The Glagoljica.hr online portal was set up with the aim of assembling in one place the digital reproductions of the works of Croatian Glagolitic heritage and make them available to researchers, university and secondary school students, as well as to the wider public. It has been developed as a result of the efforts of a large number of collaborators brought together by a common goal – to provide wide access to the wealth of all forms of Glagolitic heritage, i.e. books, manuscripts, inscriptions, chants, stone monuments, and contextualise it with the help of modern technology.

Glagolitic heritage is safely stored in numerous institutions in Croatia and abroad. All interested in its history, significance and beauty thus face considerable obstacles in trying to access its original works, or even their digital reproductions, and obtaining a comprehensive insight into this rich, but widely dispersed heritage. It is only partially digitised, and this digital content is scattered among various websites and online portals.

In 2017, the National and University Library in Zagreb initiated a project aimed at the systematic digitisation of the original works of Glagolitic heritage and the bringing together of all Glagolitic-related data and material in one place, i.e. a single online portal. The Library was joined in this initiative by numerous institutions, scholars, associations and lovers of Glagolitic. This is how the Croatian Glagolitic Heritage project started, financial resources for which in 2017 and 2018 were provided by the Croatian Ministry of Culture. Its results were soon presented on the Glagoljica.hr online portal.

During the project’s first phase, the Library digitised the Glagolitic books and manuscripts preserved in four institutions, i.e. the National and University Library in Zagreb, Library of the Croatian Academy of Sciences and Arts, St. Francis Friary in Cres and the Library of the Franciscan Monastery at Ksaver in Zagreb. Prominent scholars and researchers in the field of Glagolitic studies joined the project in this phase, as well as artists who provided their unique artistic interpretation of Glagolitic. Both the scholars and the artists generously agreed for their works to be made available as part of the portal.

The Glagoljica.hr online portal offers access to some of the most significant monuments of Glagolitic heritage, such as the Missal under the Law of the Roman Court, the 1483 Glagolitic incunabula (Misal po zakonu rimskoga dvora), Law Codex of Vinodol (Vinodolski zakonik), the works of printing houses in Senj, Rijeka and Urach, along with accompanying resources, i.e. the works’ transliterations, related commentaries, academic treatises, etc.

The portal is further being developed in order to serve as the central point of access to as many works of Croatian Glagolitic heritage as possible and enable its research and creative use, in which context it is continuously being upgraded through the addition of new tools and multimedia content bringing Glagolitic closer to contemporary audiences. 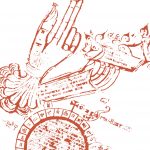